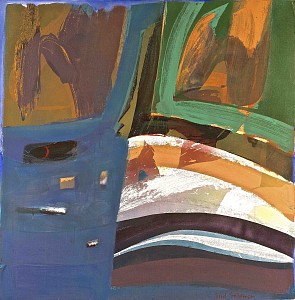 Are you ready for some strong color? Go west, young paintaholic, to Chelsea for the two most ecstatically chromatic shows in New York. Both feature artists using acrylic (nothing gives the bounce of hue, value and chroma like it) who were bold-faced names by the 1970s: Larry Poons at Danese/Corey, and Syd Solomon at Berry Campbell. Syd Solomon was a fixture on the Hamptons scene beginning in the glory days when giants roamed the beaches, including his friends Jackson Pollock, Willem de Kooning and Alfonso Ossorio. It was Syd Solomon who hosted the first artists vs. writers softball game in 1966.

Both shows have a freshness and energy that make the kids in neighboring galleries look pallid. The bright white cube of Danese/Corey is the perfect setting for an aptly straightforward hanging of one big Larry Poons extravaganza after another, blaring across the room in orchestral bravura like Ravel or Vivaldi cut loose.

Can smile at the eponymous blue figure in Oh Charlie suspended over a blur of reds, blues, yellows and Poons’s brilliant range of whites, or revel in the Joan Mitchell-esque greens sweeping along a diagonal in Untitled, two of the bright spots in a consistently powerful show.

The great critic and curator Robert Pincus Witten once observed, “Poons instrumentalizes chance (the very hallmark of Abstract Expressionist painting)." The value of that felicitous expression is particularly suited to Premonition and Gravity, which changes course both gesturally and chromatically innumerable times on the way from edge to edge. Check out the dates on these canvases:  All came out of the studio from 2014 to the present.

Larry Poons would not be pleased to read that he is entering Old Master territory. Born in Japan in 1937, he grew up in New York (he lives and works in the city still) and started his artistic life as a musician. After two years at the prestigious New England Conservatory, he transferred to the studio program at the Museum of Fine Arts, Boston.

After he returned to New York in 1958 and making a major connection with Frank Stella, one of his first major works was Orange Crush, a highlight of the Albright Knox permanent collection. His debut solo exhibition in 1963 was at Richard Bellamy’s extremely important Green Gallery. With that kind of papal blessing, his career took off, including appearances in two landmark MoMA shows, "The Responsive Eye" (1965) and Henry Geldzahler’s 1969 survey, "New York Painting and Sculpture, 1940-1970," the youngest artist featured in the show.

The Syd Solomon life story is as colorful as the work. Born in 1917, like Poons he did not start out as an artist, but was an All American high school football star in Wilkes-Barre, Pennsylvania. He studied at the Art Institute of Chicago from 1935-1938 and further developed his artistic sensibilities after joining the U.S. Army in 1940, assigned to the 924th Engineer Aviation Regiment designing camouflage systems for the desert war in Africa and airfields in England.

In combat during the Battle of the Bulge he suffered from frostbite. Discharged in November of 1945, like many great artists and writers after both wars, after his service he headed to Paris and the Ecole des Beaux-Arts, meeting, among others, Jean Cocteau.

Stateside again, Solomon began splitting his time between Sarasota, Florida, and the Hamptons. Everett “Chick” Austin, the first director of the Ringling Museum in Sarasota, made Solomon the first contemporary artist in the permanent collection, and Solomon is credited with jumpstarting the local art scene. He first visited East Hampton in 1955, and was a regular at the gatherings of Pollock, Franz Kline, de Kooning, James Brooks, Ossorio and Conrad Marca-Relli.

Although acrylics have been around since the 1940s, and art historians usually mention Andy Warhol, Kenneth Noland and Bridget Riley as pioneers in the medium, Solomon has a claim to being one of the earliest adapters for his type of expressionist surface. He certainly is one of the technical innovators when it comes to aerosol spraying—viewers will see blooms of fine mist in several of the works in the show. The technique for applying these blooms, which he called “dropping paint in layers from above,” was part of the legacy of his camouflage work in the military.

In addition to the Ringling, his work has been included in shows at the Metropolitan Museum, Guggenheim, Whitney, Dallas Museum, the Museum of Fine Arts in Houston, the Smithsonian, the Butler Institute of Art, the National Academy of Design, the High Museum, the Academy of Arts and Letters, the Rose Art Museum, the Tel Aviv Museum of Art, and the New York Cultural Center, among others.

My interest in Syd Solomon’s work was piqued when I learned that Kurt Vonnegut taped a “Conversation with Syd” for the catalogue text of a 1975 show at the Ringling. I read it in frank expectation of writerly high jinks (having known Vonnegut myself), the kind of belly laughs that come from the meeting of two guys with handlebar moustaches. In the end, the piece is a portfolio that includes camouflage tricks and that joie de vivre missing in so many artists today.

Vonnegut tries to lure Solomon into all kinds of impolitic remarks, especially about “talent,” but ended up getting a quote that is immensely insightful for those who want to understand the work. When Vonnegut pushed, Solomon said that talent was not “a broad enough word” because it left out something: “the worms of discontent … an artist has to be discontented. He has to be unsatisfied in some way.”

That dissatisfaction and restlessness, in combination with what he described to Vonnegut as his own “juicy” technique, is on display in the current show at Berry Campbell in a tight space of work from the 1970s, his peak period.

The featured painting, which gave the show its title, is Swingscape, a rollicking rhapsody in blues, and blacks. The coolest part of this work is the way gesture and color wrap around the broad edges of the stretcher bars in a sculptural effect that can be appreciated from all sides. The gestures are bigger than the quick flicks of Poons, and the swooping curves in black, as seen in the lower part of Dancing Mile, remind me oddly of Howard Hodgkin’s loaded brush, those deeper tones where purples and reds provide the ostinato bass line.

The little horizontal number, Ritmo, dances like a Miro, and there are hints of Diebenkorn in the big, bold Causeway. In addition to those blasts of aerosol and the dance of the wrist, viewers will be rewarded by looking as well for the ways in which Solomon would mask off certain forms within the painting. He even rinsed off paint to get back into the surface, and the thinner, more translucent layers are often revelatory.

Beyond these echoes, there are the influences of his friends including Franz Kline, whose voice is heard in Shoretour, with its fascinating upper edge in red and the gold against black that Kline loved to use.

A fan favorite, especially for seascape lovers, is likely to be the charming Cloudcall, a painting that builds in cascades of green and blue, the white foam animating the foreground. It brings to mind a wonderful Florida poem of Wallace Stevens, “The Idea of Order at Key West,” in which we hear the shore as music: