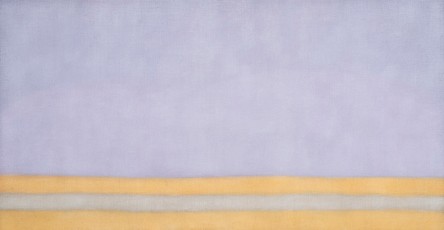 “In Between,” the title of Susan Vecsey’s show, refers both to the strange period of quarantine we currently find ourselves living in, as well as the double nature of the painter’s work, in which she floats an acquaintance with artists such as Mark Rothko and Helen Frankenthaler and their landscape-influenced abstractions with her own experience of non-objective art in response to the natural world (Vecsey lives part of the time in East Hampton). The work is subtle, deliberately beautiful, and historically cognizant of the New York School and its history during the past half-century, in particular the ongoing perceptions of a Color Field predilection. If one felt compelled to make a choice, it can be said that the works tend to lean in the direction of landscape; their simplicity makes them strong in an abstract sense, but we never lose the implication that we are close to land, to water, and to the sky. Individually, the paintings are attractive, but there is also a cumulative effect, in which the paintings work a sympathetic magic by creating a pastel-like mood and atmosphere, in which both the beauty of nature and also of art are handled with a notable measure and restraint.

The condition of being in between needs to be remarked upon; much of good painting today plays with the idea that an imagery can share aspects of stylistic genres that play off of difference in their essence. Yet it can be noted that nothing is purely abstract nor entirely figurative. Elements or parts of the painting can flow in and out of meanings that take on both styles. It is hard to see both approaches occurring in the same moment; we remember those visual paradoxes where, looked at one way, the image represents one kind of object; and then, when the mental intelligence shifts, another image comes into being--but both images cannot be processed at the same time. Perhaps Vecsey’s general achievement is to render a visual system that jumps from a particular manner of looking into another. While this process is not new--we have the extraordinary achievement of Rothko, mentioned above--its innate complexity and willingness to occupy different ways of seeing within the same composition make it wonderfully current, not to mention extraordinarily interesting as art.

The painting Untitled (Lavender/Orange) (2020) consists of what we must call a lavender sky buttressed in the bottom of the image by two light orange stripes extending across the width of the painting, with a dun-colored stripe in between. Knowing that Vecsey spends time in eastern Long Island biases our reading of the work, so that we see it as a study of dusk on the beach, although the title, which simply lists the colors used in the painting, gives us no indication that this is necessarily the case. Thus an argument for pure abstraction can be made. Still, the impression is that of a darkening evening beyond the reach of urban densities. In the work Untitled (Acqua) (2020), the color arrangement is tripartite--a ceiling of brown with an arch-like bottom hanging over an expanse of blue, which tops a blue sea-green strip. It is easy to see this as a seascape; the colors meld seamlessly into an experience of water and sky. The title reinforces this impression. Vecsey extends her view of nature by crossing it with a feeling for abstraction that is subtly intelligent. The abstraction helps shape the natural world in her art; but the opposite can also be acknowledged, in which the landscape pushes the form away from a completely non-objective point of view.

One of the best pieces in the show is the triptych, an oil on paper, called Untitled (White/Lavender) (2019). This is an unusual piece; most of the other paintings occur on linen, whose pattern can be seen through the paint. In this work, white fills the upper two-thirds of the painting, while a low mountainous presence, composed of three different shades of lavender, takes up the lower third of the painting. Or the image could also be read as a body of water, a lake or pond, backed by low, dark hills. The inevitability of multiple readings also exists in Vecsey’s art, which occupies several terrains, actual and imagined, at once. Her decision to work in this way pushes to the side our impulse to fix the art in a specific context or meaning; its multiple valences, aided by the sharpness of outlook that comes from preparatory work before the paintings are made, created a world that impresses us as Vecsey’s own--but also clearly in the service of nature. There are times when nature offers abstraction as a part of its array of forms, and the artist knows this well. The result is not only an intelligent reading of form, it is a merger of ways of thinking with separate histories and origins--a joining of decided worth. WM