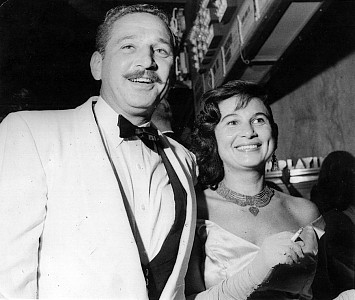 At 99, Annie Solomon Remains a Bright Light in the Local Arts Scene

When 99-year-old Annie Solomon attends an opening at an art gallery, she’s as much of a focal point as the paintings on the walls. Artists, art lovers, students and retirees all want to hang out with her.

Some admire her because she’s a vibrant link to Sarasota’s days as an arts colony in the 1940s, ’50s and ’60s. The widow of abstract expressionist painter Syd Solomon, she has clear memories of those bohemian times, when she and Syd hosted parties for local artists, writers and musicians, as well as famous visitors such as Kurt Vonnegut, Elia Kazan and Betty Friedan.

But most people are drawn to Solomon because she’s an engaging, wise, funny woman with the enthusiasm and energy of someone half her age. Though she was born five months before the end of World War I, she’s as hip as any millennial. She can handle an iPad, loves the music of Hamilton and dresses with style and panache.

“I’ve had a great life, but I don’t live in the past,” Solomon says. “I’m interested in what’s going on today. I like talking to young artists, to young people in general.” Laughing, she adds that she has to make friends with younger people because “most people my age aren’t around anymore.”

When artist Tim Jaeger had his first major exhibition in 2005, Solomon surprised him by throwing an opening-night party for him. “She cares, she listens and shares,” the 38-year-old Jaeger says. “She reminds us all not to forget Sarasota’s rich cultural heritage. She’s tough as nails—and gentle. She’ll hold you to your word and always tell you the truth. She’s the mother to all Sarasota artists.”

A Pennsylvania native and a graduate of Ohio State University, Annie met the charismatic Syd Solomon at a family wedding shortly after Pearl Harbor. “We danced together, and that was it,” she says. They came to Sarasota in 1946, shortly after Syd completed his service in the U.S. Army. “Sarasota was really paradise then, a beautiful small town,” she says. “We fell in love with it immediately.”

Through the G.I. Bill, Syd took classes at Ringling College, and Annie got a job at a dress shop. “Syd would come get me for lunch, and we’d drive out to Longboat, where we could go skinny-dipping, because there was nothing there then. We had the whole key to ourselves,” she says.

The year the Solomons arrived, the innovative Everett “Chick” Austin was named the first director of the Ringling Museum of Art, which he would propel to national recognition through the programming of contemporary work by major artists, unheard-of for a place like Florida. “You could just sense that Sarasota was going to be a place where creativity could flourish,” Annie says.

The Solomons’ homes, on Phillippi Creek and later on the southern tip of Siesta Key, were the town’s creative epicenters. And beginning in the ’50s, their summer place in the Hamptons on Long Island attracted the likes of artists Willem de Kooning and Mark Rothko, songwriter Jerry Lieber and writer Truman Capote.

“Oh, Truman was a real favorite of mine,” Annie says. “He was so smart and amusing—just a fabulous man. I loved him so.”

Mike Solomon, Annie and Syd’s artist son, says his mother was “the glue that held everything together” in those days. “She’s so convivial, she has that knack for making people feel comfortable,” he says. “You’d walk in and might find her making chicken soup for Kurt Vonnegut because he was depressed about something.”

Solomon’s current residence, a condo with a stunning view of the bayfront and walls filled with Syd’s bold, colorful paintings, is still a gathering spot. Several years ago, Mark Ormond, then a curator at the Ringling Museum, asked her to help him put on a party for Florida artists being celebrated in an exhibit.

“She offered to host it, and the guest list kept growing,” Ormond says. “There must have been 125 people in that apartment, but she wasn’t fazed. She kept making more chili.”

Solomon lives independently, with help from Mike (a Sarasota resident) and a wide circle of friends. She’s in remarkable health, save for the macular degeneration that has compromised her vision. But she still reads voraciously on her Kindle.

For someone nearing 100, she also travels extensively. She visited daughter Michelle in Tennessee this past summer (and after 12 hours riding back in the car with Mike, managed to make a breakfast date the next morning). In early October, she was in Manhattan for the opening of Syd Solomon: Time and Tide, an exhibit at the Berry Campbell Gallery that runs through Nov. 11. Next year, she’ll be in East Hampton for another Solomon exhibit at the famed Guild Hall. That exhibit, Syd Solomon: Concealed and Revealed, will also come to the Ringling Museum in 2019.

During an interview, Solomon’s smile faded only once, when she talked about her husband’s 10-year descent into Alzheimer’s disease before his death in 2004. “It was tough, just awful to see someone so bright and funny and full of life disintegrate like that,” she says.

She works to keep her mind sharp. “I go to movies and plays and dinners. I love to follow politics,” she says. (A proud Democrat, she told friends the day after the Trump victory that “I can’t believe I hung around this long for this!”)

Her secret weapon for aging well just might be tequila. “I put a bottle in the freezer and have a little bit every day,” she says. “Tequila is made from the blue agave plant, and that’s good for you. The higher-end brands are 100 percent blue agave.” She received eight bottles at her last birthday party, “and they were all top-shelf,” she says, beaming. She says she’s not sure how she’ll celebrate her 100th birthday next June. (Hint: She’ll likely need more tequila by then.) “It’s just amazing to me that I’m here at all,” she says. “But I am, and I’m happy to be here.”