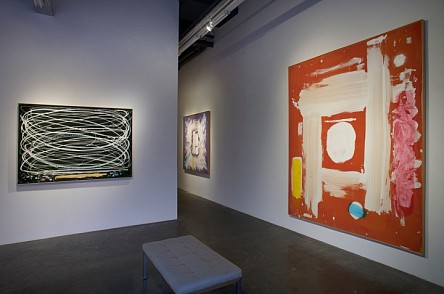 Berry Campbell’s current exhibition highlighting the stain paintings from the last decade of Dan Christensen’s career brings to life an intriguing body of work from a perhaps under the radar artist working in the Abstract Expressionist and Color Field traditions at the close of the twentieth century. The works included in this aptly titled “Late Calligraphic Stains” exhibition hearken back to the work of icons of mid-century art history: Pollock, Rothko, and Twombly among them, but Christensen’s handling brings something truly unique to the conversation.

While Christensen, who died in 2007, experimented with paint application techniques throughout his lengthy career, these late period stains seem to exude a warmth and energy emanating from an overall airiness and freedom. Though they incorporate gestural imagery, the lightness with which the stain of acrylic paint is applied to the canvas leaves no trace of the artist’s hand, rather it is almost as if the vibrant colors come from within the grain, leaping out to touch the viewer. The “calligraphic” marks, largely traced in white, are similarly ephemeral in appearance, as they seem to rise and recede against the surface of the canvas. Lines dance above and between other formal elements, in tribute to the significant influence of Jackson Pollock on Christensen throughout his career – the parallels of their lives even extend to moves from the rural west to New York City, eventually to Springs, Long Island.

The works in the exhibition are modest in size, yet they emit a sense of monumental presence. Christensen’s joyful palette and playful use of line and form represent a peak in the expressive capabilities of abstraction. Though Christensen is often defined as a Color Field painter, his innovative use of the history of abstraction at large in these late works seems to place him into another category all his own.