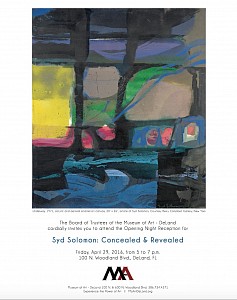 A Traveling Museum Exhibition of 36 paintings and works on paper with a hardcover catalog with essays by Michael Auping – Chief Curator of the Modern Art Museum of Fort Worth, George Bolge- Director, Museum of Art in Deland, FL and the eminent Art Historian, Dr. Gail Levin.

Kenneth Donahue, the late Director of both the John and Mable Ringling Museum of Art and Los Angeles County Museum of Art once wrote, "Color is traditionally the language of emotion. Syd Solomon is a colorist, heir to the American tradition, intuitive, free and passionately ‘embosomed in Nature’ to use Emerson’s phrase."   Infusing the spirit of Romanticism into the processes, scale and concepts of Abstract Expressionism has been said to be Solomon's singular contribution to American Art. However there are new findings about the artist that greatly augment our understanding of this very unique artist's development. These come out of the recent organization of the Solomon Archive in Sarasota, Florida.

Solomon's work as a camoufluer in WWII was always acknowledged but what was not understood before was how his particular expertise as an aerial camoufluer, came to inform his later approach to painting.  The orientation and perspective he developed from having to disguise ground based assets from the air, morphed into his post-war paintings, through his development of spray and masking techniques which he employed as early as 1954.   He once described spraying as "dropping mists, like color bombs from above."  The works of this exhibition include many of his best aerosol enamel and acrylic paintings.

Even less had been known about Solomon's skill in lettering. He received training in high school and worked for his early years doing ads and signs for hotels, stores, businesses, magazines and newspapers. Like his closest colleague James Brooks, the influence of the ability in lettering, is significant factor in the later brushwork, the incredible calligraphy seen in the gestural aspects of his paintings which Director George S. Bolge refers to in his learned essay, as Solomon's "handwriting."

Syd Solomon held important roles in the art communities of Sarasota, Florida, and East Hampton, New York.  His paintings may be found in over 100 museum collections in the United States and worldwide.

The Estate of Syd Solomon and the Berry Campbell Gallery have organized this exhibition focusing on these particular aspects of Solomon's achievements.