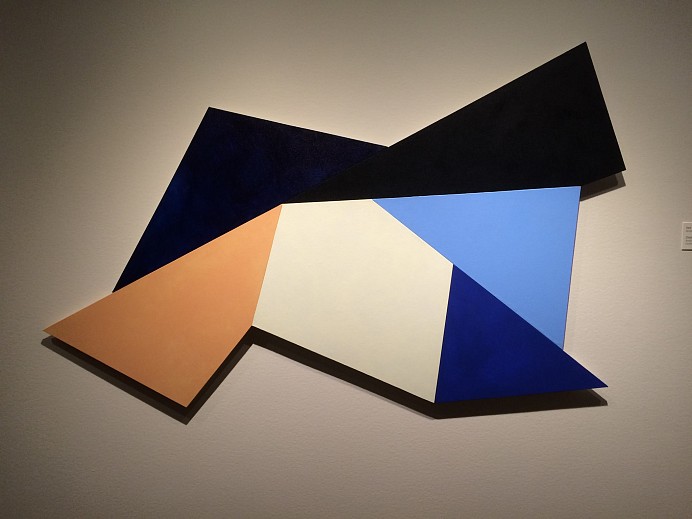 Curated by Alison Ferris, the Portland Museum of Art’s 2015 biennial opened on Oct. 8. Ferris is the curator of the John Michael Kohler Art Center in Wisconsin, but she is better known to Mainers as an erstwhile curator of the Bowdoin College Museum of Art and for her work on the Maine Arts Commission.

This biennial covers a broad range. After Portland Museum of Art curator Jessica May shunned painting in the 2013 biennial (there was one painting from a previous decade in a back room), painting leads the list this year. But Ferris’ biennial also features excellent craft, sculpture, photography and installation. The biennial leans a bit too much on established artists (identifying emerging talents has been a most exciting facet of past biennials), but it is intentionally diverse, excitingly chaotic and, sometimes, pleasantly capricious. It is not by any means entirely successful, but it is a Sisyphean task to choose a cross-section of Maine’s contemporary art that is both comprehensive and will fit in the museum’s first floor gallery.

I am a huge fan of architect Henry Cobb and the Portland Museum of Art’s Payson building, but the main gallery is a tricky space that doesn’t reward overly dense installations. And the 2015 biennial is dense.

To her credit, Ferris plays the chaos card straightforwardly: Viewers are greeted by the busiest face of the show as they enter the biennial’s first room. To the left are several vitrines stuffed with baskets woven by four Wabanaki artists. This is one of the most exciting aspects of the exhibition; the 25 baskets are impressive, interesting and often exquisite. Unfortunately, they suffer from (and because of their numbers, add to) the visual noise of the front room, which contains almost half the works in the show. Moreover, there is an uncomfortable otherness to the Wabanaki works, as though identity politics apply to them alone. This hit me when I read Ferris’ catalog comment, “Maine is neither used as nor portrayed as an idyllic refuge by the artists in this exhibition – there are, for instance, no realistic or romanticized landscapes or seascapes.”

And yet Sarah Sockbeson’s “Glowing Sunset” basket features a romanticized acrylic landscape painting. Similarly, Jeremy Frey’s “Loon” basket includes a decorative Maine cliché image on top. But these nationally recognized artists are strong enough that Ferris didn’t need to let them have a free pass on kitsch, a standard for all others as implied by Ferris’ published statement. Ferris’ unfortunate imbalance of curatorial editing here feels condescending in a show proclaiming to be all about rigorous editing, which this of course is.

The biennial’s editing process has, in fact, been a point of controversy. The museum in 2013 dropped the juried format requested by the late William Thon, whose bequest funds the biennial for a curated approach that doesn’t look to submissions from Maine’s artist community.

The other side of the front room is the only other major problem with this biennial. Richard Van Buren’s mixed media sculptures are loud and intentionally campy. They look like what you would get if you swept the morning-after leavings of a raucous Mardi Gras parade into buckets of resin, and they clash horribly with Meghan Brady’s jangly abstract paintings. Brady’s works depend on oddly syncopated rhythms that are here choked by the loudness of the visual conversation (more like a shouting match) set up between them and Van Buren’s sculptures.

Exiting the first room, you walk into a great show.

The biennial’s strongest piece is John Bisbee’s old-man’s ear trumpet, “Hearsay,” made of his shtick-signature 12-inch nails. It is a great sculpture that crosses comfortably into craft. “Hearsay” and its decidedly less impressive companion, “Thicket” (which looks like a hairball coughed out of the handsome “Hearsay”) also appeared in Bisbee’s extraordinary 2014 “New Blooms” exhibition at Vermont’s Shelburne Museum.

Anchoring the center of the space is John Walker’s great “Wake,” a rough and muscular canvas only surpassed in the show by Ken Greenleaf’s “Chelsea Bridge,” a shaped multi-panel geometric painting that writhes with ecstatic slowness on the exhibition’s otherwise empty end wall as a brilliant bit of punctuation. Gideon Bok’s powerful studio paintings are also particularly notable in this setting as they model the elegant chaos curator Ferris has targeted.

Craft-oriented works distinguish Ferris’ biennial. Miles Spadone’s vessels are extraordinary examples of intriguing design. George Mason’s plaster, acrylic and burlap hangings flicker between textile and mural. Jeffrey Clancy’s pewter vessels made to replicate historic objects from the museum’s collection introduce some of the exhibition’s most sophisticated conceptualism insofar as the handmade objects reveal oddities of recreating three-dimensional objects from two-dimensional images. Clancy displays his versions along with the historic objects and the single-view images from which he made his simulacra; this reveals how, for example, the profile view of a pitcher’s spout only partially provides necessary information required to recreate – and confirm – the original design. The most mysterious objects in the show also fall into this category: Bradley Borthwick’s trio of leather, beeswax, wood and slate “Minka.” Based on material processes used for traditional homes of Japanese craftsmen, Borthwick’s exquisite objects appear in saddle-like forms unlike anything I have ever seen.

Two of the most striking objects are outliers: Bret Bigbee’s hyper-focused, hallucination-like portrait of a girl, “Josie Over Time,” and Randy Regier’s nostalgic fantasy super-toy “A Machine to Dispel Sadness: XI,” an 8-foot 1950s-style submarine/spaceship fighter-launcher that looks like it escaped from a Miyazaki film.

Two victims of the first-room cacophony are drawing and painting doyennes Emily Nelligan and Lois Dodd. Nelligan’s haunting charcoals are clustered in a corner while Dodd’s suite of understated and sophisticated suburban New Jersey paintings gets lost behind towers of decorative basketry.

Clancy’s pewter vessels were made only from the images displayed on the wall. Clancy did not see the PMA’s original, historical objects he replicated until his own versions were finished.

Ferris and the included artists were not part of the institutional decisionmaking that shifted the biennial from a juried show to a curated one – a change I find deeply troubling – so that is a separate conversation from this look at the exhibition. And, while the process issues are important and disrupting, they will undoubtedly evolve. (How about an online sign-up form for artists who want to be considered for the next biennial? And shouldn’t that $5 surcharge go to the artists? To sell tickets, after all, venues pay for the movies and musicians they present – so why not pay the artists whose work the Portland Museum of Art asks us to shell out $17 to see?) Still, Ferris and her artists deserve credit. “You Can’t Get There From Here” is an impressively solid, worthy and interesting exhibition.