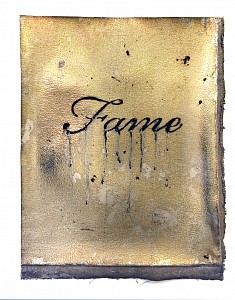 Something Old, Something New: Glitter and Glam at Berry Campbell

“Noah Becker Presents… Something” is a New Yorker’s show. As children of glam, gold, glitter and garbage, much of the 26 artworks dance at the shiny-dusty feet of Andy Warhol, the city’s veritable king of things. These could easily turn trite as riffs on the classics of Pop and abstraction, mixed media and montage; however, curator Noah Becker has thoughtfully gathered the artists by their more subtle connections of something or another.

On entering the gallery, one steps directly into Marc Dennis’s Out of this World (2015), a painting of a woman contemplating Gustave Courbet’s The Origin of the World(1866). Skillfully rendered, the infamously provocative artwork is presented — frame and all — within Dennis’s picture plane. The observer’s long hair strategically obstructs the very thing she is contemplating. Lovers of Shakespearean punning might be brought to the wordplay of “nothing in Hamlet:

Ophelia: I think nothing, my lord.
Hamlet: That’s a fair thought to lie between maids’ legs.
Ophelia: What is, my lord?
Hamlet: Nothing.

For Dennis to so strategically censor this nothing, and for Mr. Becker to juxtapose his own painting, Something(2015), right next to it, makes for a playful introduction to the show.

Irena Jurek, an artist of boundless energy and glitter, presents her iconic, anthropomorphic cat people in Something to Talk About (2015). The cats, considered intrinsically female by the artist, stand, crawl and strut across the canvas in velvety purples, blue highlights and metallic pen. Cartoonishly grotesque and yet powerfully present, these sex kittens celebrate the fuzziness of their eroticism, and even of their species, within city life.

Aaron Michael Skolnick’s watercolor series, Choking on the Ashes of a Memory (2015), reference Warhol’s images of “nothing” as depicted in his late, fairly vapid shadow paintings. On a smaller scale (11 x 8 1/2 inches each) and with a decidedly more delicate medium than Warhol’s, Skolnick’s work presents the shadow-bearing image of something rather than nothing: a burning cross, repeated 24 times. The pages, loosely arranged, are jarring as they jump from matte blacks to milky bright blues and reds. This use of such a disturbingly American symbol transcends the clear act of appropriation to highlight the persistently long shadow of racial injustice across the decades.

Something is largely a show of painters, but a few sculptural pieces are to be found in the coy ceramics of John LaMacchia — a New York artist known for his street-wise ability to artfully utilize the trash of a city. Sporting images of Smucker’s jars, coffee filters, and ads for transgender escorts, LaMacchia’s vases are decorative, blue-and-white ware containing nothing. But they’re also disruptive artifacts of pop culture (viewers should note the lovingly aligned cigarette butts).

One of the most familiar explorations of something may be found in the gold sheen of Nir Hod’s Fame (2015). Composed of oil and acid on an oxidized chromed canvas, Fame, captures the blues of living in New York — a city as acidic as it is gilded. Certainly after the recent passing of David Bowie (an idol, like Warhol, of shifting ambiguity), this work hangs heavier against the wall. Through the small and personal scale of the piece, and its visual spareness, Hod warily approaches the realities of fame: the something and the nothing that makes up lonely glamour.

In a calculated yet celebratory balance of joy and nihilism, something and nothing, precedent and pop, this group exhibition of “Something” feels as bright as it is deep. Though the past looms large in some of the flagrant appropriations, there is still a strong and genuine sense of the present by the close curation of the artwork. The range of style, the varied handling of paint and the seemingly disparate subjects all fall comfortably into that field of glittered something that New York loves. Separated, it is not certain that these artworks would be as powerful. However, like Jurek’s gang of cats, when put together really they’re something else.f