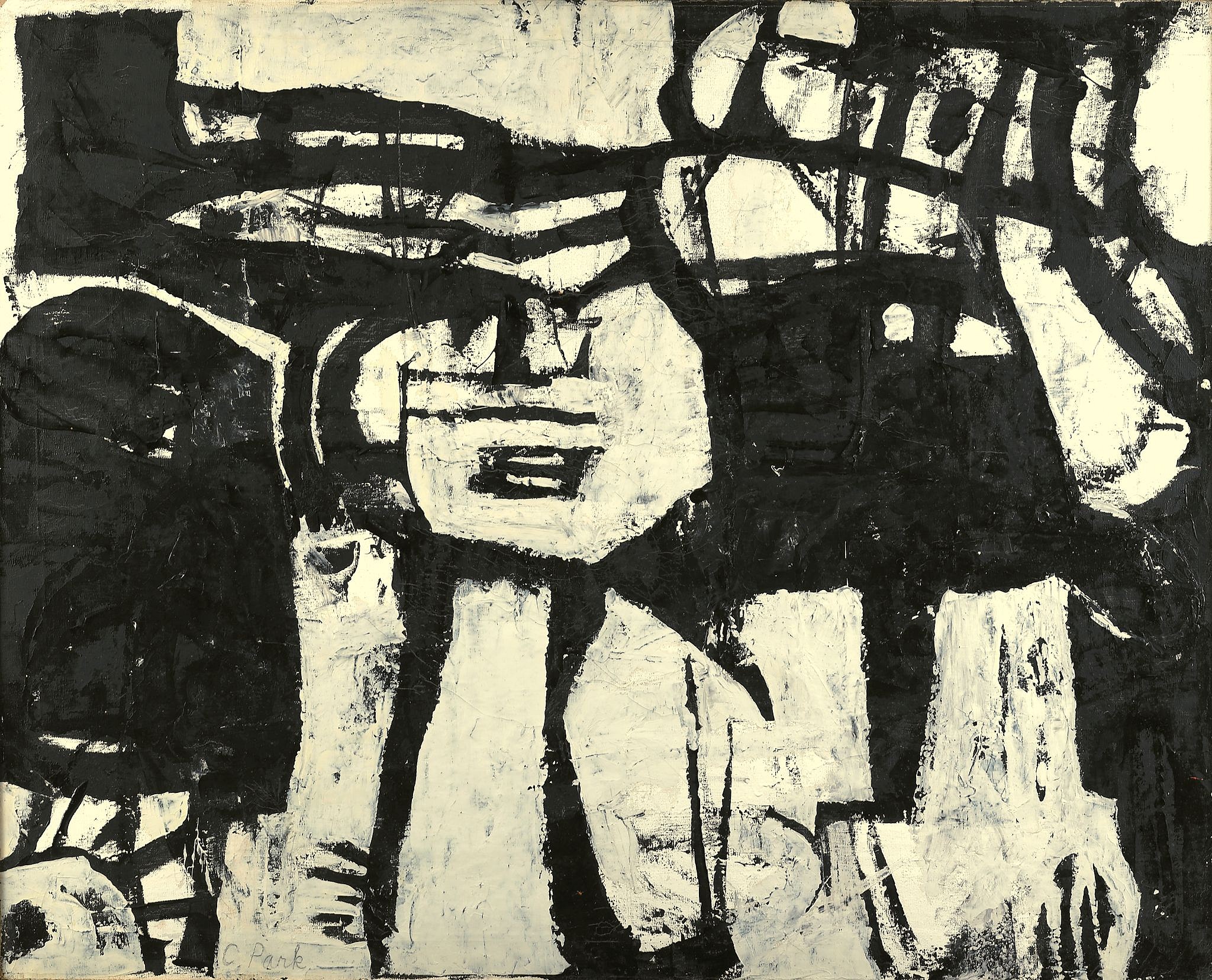 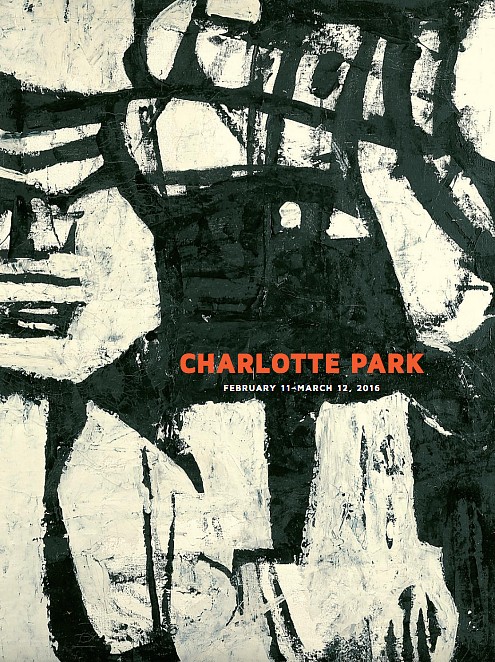 NEW YORK, NEW YORK, February 6, 2016 - Berry Campbell is pleased to continue its winter season with a exhibition by Charlotte Park (1918-2010).  This important exhibition will feature over twenty paintings and works on paper from all decades of Park's career.  The show opens on February 11 and runs through March 12, 2016. A six page brochure will accompany the exhibition.
Born in Concord, Massachusetts, Charlotte Park (1918–2010) graduated from the Yale School of Art, New Haven, Connecticut in 1939. During World War II, she met James Brooks while working at the Office of Strategic Services in Washington, D.C., and the couple soon moved to New York City in 1945, where Park studied privately with the Australian artist Wallace Harrison. After moving to New York, the excitement of the Abstract Expressionist art scene captivated Park and Brooks, and they soon joined the ranks of its leading avant-garde members, while developing close friendships with the movement’s pioneers like Jackson Pollock and Lee Krasner. Through their close friendship, Park and Brooks rented the front space of Pollock’s old studio at 46 East 8th Street. In 1949, Brooks and Park joined the Pollocks and many other artists such as Willem de Kooning and Franz Kline on Long Island, first in Montauk and then settling in Springs, East Hampton. Helen Harrison, director of the Pollock-Krasner House and Study Center characterizes the time: “These artists were forging a new aesthetic and only they understood what they were doing, so there was this sense of camaraderie.”1

Park kept a low profile over the course of her career, her paintings overshadowed by the attention given to the work of her husband, James Brooks. However, Charlotte Park’s important and distinct contribution to the Abstract Expressionist movement during its early years has recently received increased attention from art historians, critics, and collectors for her muscular and brilliantly colored canvases with thickly painted surfaces often achieved by scraping the paint with a palette knife. Writing in The New York Times just before Park died in late 2010, Roberta Smith called Park “a natural painter and a gifted colorist,” whose “ascension into the ranks of widely known Abstract Expressionists” was probably too late for her to witness.2 Park’s art disproves the assumption prevalent from the 1950s onward that women were incapable of the strength and confidence necessary to be action painters. Robert Pincus-Witten supported this notion in Artforum: “The case of Charlotte Park is exemplary; hers was a major gift all but stifled by a happily embraced domesticity and by the critical bullying of a brutally doctrinaire art world.”3

In the early 1950s, Park worked in a monochrome palette, which liberated her to focus on form. Pincus-Witten wrote, “Executed within a kind of pictogrammatic loosely Cubist grid, these works—a memorable example being #25, 1951—suggested vaguely animistic configurations (for all their commitment to abstraction), and for Park served, as black-and-white paintings did for Pollock, de Kooning, and Kline, as the platform from which her own work would spring even higher.”4

By the mid-1950s, she reintroduced color into her art in works like Jubilee, ca. 1955, creating charged relationships with hot oranges, greens, and brilliant blues. Uniting painting and drawing, she formed a vocabulary featuring clustered loops, black curvilinear forms that both define and liberate. Figurative and still life elements and suggestions of the natural world seem to taunt and loom in her art but are either suppressed or diffused. Park was a naturalist and kept extensive and exhaustive journals and notes about various leaves, birds sightings, and changes to their grounds or the nearby beaches.

In the late 1950s, Park explored collage, concurrently with her contemporaries Krasner and Conrad Marca-Relli. In works like Untitled (Color Collage II), c. 1957, she drew passages of color and shapes from her earlier paintings, setting them in to a new format. By the 1970s and into the 1980s, Park reduced her compositions “down to a few essentials so that the artist could convey the most delicate of feelings in the most economical way possible,” writes Mike Solomon, artist and long time family friend of Brooks and Park, for a review of her 2013 exhibition at the Pollock-Krasner House and Study Center. Although influenced by Piet Mondrian’s neo-plasticism, these works were in line with the minimalist tendencies of that time creating compositions that conveyed permanence and infinity. While many of the curvilinear forms and shapes are similar to the works from the 1950s, in the years beyond that, her work became more reductive as she used white as the ground and built up layers of color only to be painted over again with white, thus creating a veil over the original shapes and lines. The bold insistence of the 1950s and 1960s gives way to a lighter feel with the same intensity. “That period of her work was on the same level as Agnes Martin,” writes Solomon.5

In the 1950s, Park exhibited her work broadly, showing at the Stable Gallery and participating in annuals at the Whitney Museum of American Art. Her first solo show was at Tanager Gallery in 1957. In 1973 Park had a solo exhibition at the Elaine Benson Gallery in Bridgehampton, New York. In the twenty years that followed, she was included in numerous exhibitions on Long Island and in New York City, including exhibitions at the Guild Hall Museum, East Hampton (1979) and the Parrish Art Museum, Water Mill (2002). She was also represented in Seventeen Abstract Artists of East Hampton: The Pollock Years, 1946–1956, held in 1979 at the American Cultural Center of the United States Embassy, Paris. Park’s art was featured, along with that of Dan Christensen and Allan Wexler in the exhibition, Three East End Artists, held at the Parrish Art Museum (2003). In 2013 Helen Harrison organized Charlotte Park: The 1950s for the Pollock-Krasner House and Study Center. Park’s work is included in the collections of Guild Hall, East Hampton, New York; the National Gallery of Art, Washington, D.C.; the Parrish Art Museum, Water Mill, New York; the Telfair Museum of Art, Savannah, Georgia; and the Whitney Museum of American Art, New York.