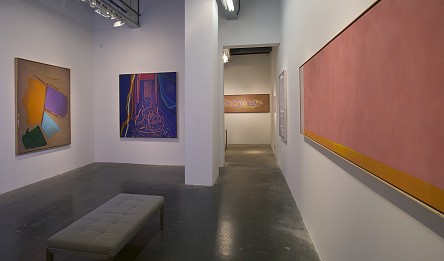 The Singular Work of Dan Christensen Celebrated in Retrospective

Known for his ambitious experimentation with gestural abstraction during the Minimalism-dominated 1960s, the late painter Dan Christensen is being honored this month in a retrospective at Berry Campbell Gallery. Exuberantly kicking off the gallery’s fall season, “Dan Christensen | Retrospective” includes work from all four decades of the artist’s career.

The paintings of Jackson Pollock first inspired Christensen to become an artist, but it was the work of the Color Field Painters that helped shape his style. In 1964, after completing his BFA at the Kansas City Art Institute, he moved to New York, where his career quickly gained traction. Although the Minimalists reigned during his first decade in the city, Christensen stuck to lyrical abstraction. With painters like Jules Olitski, Christensen proved that there was a place for vitality and expression in art, and that painting remained a medium full of possibility.

The show includes more than 20 of Christensen’s works, ranging from the 1960s to the early 2000s, and often so large that to stand in front of them is to have the surrounding world blotted out, replaced by the artist’s pulsating, gestural, saturated experimentations. Christensen was known for using unconventional implements—most famously the spray gun. He applied paint with weed-sprayers, brooms, and squeegees, among other things, alternating between fat, sweeping gestures, delicate, allover scribbles, and softly glowing geometric shapes—sometimes all in a single painting.

The different effects of his tools are apparent in Dolby (1998), a hypnotizing composition with a black oculus surrounded by a radiating pink halo. The entire black-pink circular ensemble is surrounded by thick swaths of midnight-purple pigment, edged by drips of excess paint that run down the work’s surface. The composition is suggestive of a portal, accessed through a lush nest of brushwork—an Op Art illusion of depth and infinity married to the gestural immediacy of Abstract Expressionism. It’s a good example of how eloquently Christensen packed an abundance of energy into a single image, and why he remains so important today.