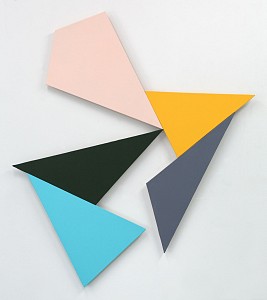 COCA ART MEDIA
AN HOUR AGO

Maine-based American artist Ken Greenleaf in his latest body of works explores the dynamics of human perception by experimenting with the relationships between planes, edges and colors. The following interview is conducted with the artist by COCA Art Media regarding the exhibition of Ken Greenleaf’s recent work at Berry Campbell Gallery, New York, from November 20, 2014, to January 3, 2015.

COCA Art Media: Your artwork is largely modernist and minimalist. How have you developed such a style?

Ken Greenleaf: I don’t call it a style, but a method. It’s not new, of course. It’s not something that I’ve created, but I believe in this method because I believe the relationship of shapes to each other, to the edges and to how the colors affects how I feel about what I’m looking at. In my works, I try to create meaningful relationships of that kind, which I hope would be recognized and felt by the viewers.

COCA: Could you please elaborate on how the “geometric relationships” presented in your works would affect the perceptual experience of the viewers?

KG: I think they induce a kind of feelings or a set of ideas, or impel the viewers to think. If people walked up in front of one of my works, they would look at the piece and the relationships in it. They might ponder the colors, such as how the colors make things look different. The more the viewers probe, the more they would follow and enjoy the work. At the same time, the viewers have somehow been changed as their attention was engaged. They are not the same as they were a moment ago. It’s a very small change, but a change.

COCA: In the press release, it mentions that “by jettisoning ‘narrative, rhetoric, and illusion,’ [you] strives to go directly to the nature of art.” What, for you, is the “nature of art”?

KG: That’s a very difficult question, and there’s no easy answer. I feel that art does one thing that is very important: No matter what kind of art it is, it should communicate something that cannot be directly expressed in words. In order for art to be good, it has to reveal something that can’t be done any other way.

COCA: Besides being an artist, you are also an art critic. How do the two practices influence each other? What do you think is the relationship between art creating and writing?

KG: Writing about art helped my evolution in that analyzing others’ works for years gave me a better sense of what I wanted to do. That being said, I no longer engage in art criticism since I returned to making art. Criticism means thinking someone’s work using words. As long as I was doing that and then tried to make my own art, I couldn’t help thinking about mine in words too, which was not good for me. I want to think instinctively. I want to focus on the things that I’m trying to accomplish, which are not something that I can make a text about.

COCA: Your wife – painter Dozier Bell – creates art quite different from yours. How is the daily life like for an artist couple like you two?

KG: We talk about art a lot, not so much in terms of generalities, such as what to do or how to do. I would look at her work and talk about it. And she would do the same. I value her opinions, because she is so smart and so perceptive. Other than that, it is just a marriage. We are each other’s best friend.

COCA: Your artwork has a strong philosophical underpinning. Many viewers have detected the influence of philosophers such as David Hume and Kant in your art. What do you think is the relationship between art and philosophy, in your own work in particular?

KG: Many philosophers seek to understand how people perceive.  My artwork does that as well, especially since I intend neither to tell a story nor to lead the viewers to think in some political and social way that I’d like to espouse. What I’m interested in is to learn, as much I can, about the nature of how people think. There are times when people see things entirely differently from the way that I might. I can’t tell what they could be thinking, but I know there must be some kind of fundamentals of perception, which I try to contemplate or sense. As I said earlier, I want my work to bring about some change in the viewers’ attitude when they are looking at it. The change is not specific. If people liked or were engaged in my work, they might learn something, alter their thinking, or experience some change in the spirit or mood in some way. How the transformation takes place is a mystery, but it happens. That is a philosophical or even spiritual problem. I think Kant and Hume both delved into that issue in their own ways, but I don’t look to them necessarily for inspiration.

Photo Courtesy of the Artist