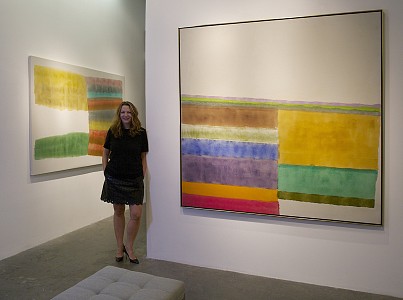 Christine Berry quoted in Bloomberg News along with David Zwirner Gallery and Hauser and Wirth about a new generation of collectors.

The fair’s 13th edition, with 267 galleries from 31 countries representing 4,000 artists, opens tomorrow to select guests at the Miami Beach Convention Center and on Dec. 4 to the public. Sellers expect collectors to continue their buying spree following the record $2.3 billion of Impressionist, modern and contemporary art that sold during November’s auction season.

“It’s going to be a very strong fair,” said the New York dealer Christophe Van de Weghe, whose booth has a Christopher Wool painting for $6.3 million and a Jean-Michel Basquiat work for $5.5 million. “There’s a lot of collectors coming from so many different parts of the world, and all have a big appetite to buy art.”

Art Basel Miami Beach will whet that appetite with trophy names including Andy Warhol, Alexander Calder and Sigmar Polke at individual prices as high as $18 million. The fair is the focal point of a week in which billionaires and celebrities swarm Miami to attend invite-only dinners and poolside parties where singers including Miley Cyrus are expected to perform. The fair runs through Dec. 7.

75,000 Visitors
Art Basel in Switzerland and the Miami version were the second- and third most-attended art fairs in the world, respectively, from the fall of 2013 through June 30, behind a Madrid-based collectibles fair, according to Skate’s, a New York-based art market researcher. Attendance in Miami is expected to exceed last year’s 75,000, fair organizers said.

Dealers and advisers said that collectors are more willing to embrace contemporary art as the market has matured and expanded.

“Thirty or 40 years ago, the type of people who could collect contemporary art would have been buying Old Masters and Impressionist art,” said Marc Spiegler, director of Art Basel. “That’s completely changed now.”

The value of art on display at Art Basel is $3 billion, up from the $2 billion to $2.5 billion estimated in 2011, according to AXA Art Insurance Corp.

Younger collectors are expected to descend on the city.

“We’re talking under 30 years old,” said Christine Berry of Berry Campbell gallery in New York. “Their money is across the board. It’s self made; it’s inherited; it’s finance. It’s a new generation of collectors.”

As a result of major investment in Miami’s high-end real estate market by South Americans, collectors from Venezuela, Mexico, Argentina and Colombia are expected to turn out in force.

Warhol Portrait
“We’ve seen a real strength in collectors from South and Central America who may not go to other fairs,” said Greg Lulay, a director of David Zwirner in New York.

Acquavella Galleries will offer a Warhol portrait of Mao Zedong for $15 million to $18 million and a sculpture by David Smith for $7 million to $8 million, among works from other artists.

Hauser & Wirth, with locations in New York, London and Zurich, is selling works by four artists, including a $3.5 million, 10,800-pound glass sculpture by 59-year-old New York-based Roni Horn, the largest she’s ever produced. David Hockney’s landscape drawings created on an iPad are priced at $28,000 at Pace gallery.

At the center of New York-based Marianne Boesky’s booth is a $600,000 carbon fiber and stainless steel sculpture from 2007 by Frank Stella. Mnuchin Gallery from New York also has Stella - - a 1978 colorful dyptych for $2.8 million. Regen Projects of Los Angeles is selling works by artists including Doug Aitken, Walead Beshty and Liz Larner for $10,000 to $400,000.

Dominique Levy’s stand has paintings, sculptures and photos by Alberto Burri, Keith Haring and Richard Serra at prices from $75,000 to $3 million. Galeria Millan, based in Sao Paulo, will feature Brazilian artists including Artur Barrio, whose 1982 photographs of one of his well-known performances are $220,000.

Satellite Fairs
The more than 20 satellite fairs will sell art by younger or emerging artists or by galleries that were once cutting edge and now have gained a foothold. Most aren’t limited to U.S. exhibitors.Scope, for instance, features 126 galleries from 27 countries. The satellite fairs are dotted around the city, with some in tents on the beach and inside hotels on Collins Avenue.

“Last year the preview felt like a frenzy,” said Heather Hubbs, director of New Art Dealers Alliance (NADA). “People were climbing over each other to buy stuff. The gallerist Derek Eller was saying that people were coming into his booth and automatically buying two things. Everything was being doubled.”

At Pulse, which is expecting more than 17,000 people, Gusford Gallery of Los Angeles is selling an acrylic and screenprint by Genevieve Chua for as much as $50,000.

Warehouse District
Art Miami will present 200 galleries in a tent in Wynwood, a warehouse and manufacturing district that has become a neighborhood of trendy restaurants, cafes and art galleries. Galerie Forsblom of Helsinki is selling a 2014 purple wrinkled velvet canvas by Jason Martin for $130,000.

More than 30,000 people are expected to browse Design Miami, where galleries will exhibit interior design and furniture at prices from $4,000 to $4 million.

Then there are the parties and product launches. “People love to come to Miami,” said dealer Van de Weghe. “They like to look at art, go to the beach, go to nightclubs.”

Maybe not everyone. “I’ve had a lot of collectors say that they’re not going this year,” Eleanor Acquavella Dejoux, co-owner of Acquavella, said. “Because Miami attracts people who are also interested in other things besides art, it seems like sometimes collectors just forgo this one.”