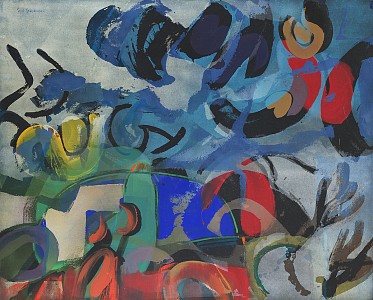 Berry Campbell Gallery is pleased to announce its representation of Abstract Expressionist painter Syd Solomon (1917-2004). A curated solo exhibition of the artist’s work will be featured April 23 – May  23, 2015 at the gallery’s Chelsea location. In December 2014, Berry Campbell will participate in Miami Project (December 2-7) during Miami Art Fair Week. The gallery will present Dancing Mile, an important example of Solomon’s work from 1977.

Born near Uniontown, Pennsylvania, in 1917, Solomon had a long and varied training as an artist. He began painting in high school in Wilkes Barre, Pennsylvania, where he was an All-American football player, before going on to study at the Art Institute of Chicago from 1935 to 1938. After joining the war effort prior to the attack on Pearl Harbor, he married Ann Francine Cohen, and was assigned to the 924th Engineer Aviation Regiment of the US Army. During the war, he was able to hone his artistic skills by creating camouflage to disguise and protect the airfields being built by his battalion.

Working with the artist Barbara Hepworth, he helped camouflage airfields in England, and then was sent to Normandy, early in the invasion, to provide protective concealment for the ground war. He also designed aerial camouflage for the African campaign and was considered one of the best camouflage experts in the Army, receiving five bronze stars, among other commendations, for his efforts. Solomon often remarked that aerial reconnaissance during World War II influenced his ideas about abstract art. At the end of the war, he attended the École des Beaux-Arts in Paris.

Having suffered frostbite during the Battle of the Bulge, Solomon chose to settle with Annie in the warm climate of Sarasota, Florida, home to the Ringling Museum of Art. The artist soon became friends with Everett “Chick” Austin, the museum’s first director. At the suggestion of Alfred Barr, then director of the Museum of Modern Art, the Ringling Museum began collecting Solomon’s paintings. His were the first paintings by a contemporary artist to become part of the museum’s permanent collection. This began a long association between Solomon and the Ringling Museum, and he also formed close ties with nearby Ringling College of Art and New College.

During the 1950s, Solomon participated in numerous national exhibitions, including at the Whitney Museum of American Art, New York; the Corcoran Gallery of Art, Washington, D.C.; and the National Academy of Design, New York.

In 1955, Syd and Annie Solomon visited East Hampton on the East End of Long Island, New York for the first time at the invitation of his former protégé, the artist David Budd. In East Hampton, Solomon met and befriended many of the artists of the New York School, including Jackson Pollock, Franz Kline, Willem de Kooning, James Brooks, Alfonso Ossorio, and Conrad Marca-Relli. By 1959, and for the next 30 years, the Solomons divided the year between Sarasota and the Hamptons.

Victor D’Amico, the first Director of Education for the Museum of Modern Art, recognized Solomon as the first artist to use acrylic paint. His early experimentation with this medium and others put him put him at the forefront of technical innovations in his generation.

Solomon was one of the first artists to use aerosol sprays and resists, innovations influenced by his aerial camouflage training. He described the practice of using sprays as “dropping paint layers from above.” This technical ability allowed for groundbreaking achievements in abstract painting, and his canvases were acclaimed for their visionary and romantic expression.

Solomon sought to evoke the forces of nature through abstract expressionist gestures, and he is best known for his challenging color, which—while including the palette of his peers—extended the range to teals, pinks, and sea greens, among others. This spectrum of color was owed to the “polaroid,” a term he coined to describe the color he experienced working in natural environments on Long Island’s East End and Florida’s Gulf Coast.

In 1959, Solomon began showing regularly in New York City at the Saidenberg Gallery and in the Hamptons and Miami at the James David Gallery run by the renowned art dealer, Dorothy Blau. His reputation reached an apex in the 1960s, when he won numerous national awards. This included Painting of the Year from the Whitney Museum in 1961 and the 13th New England Annual awarded by the Guggenheim Museum’s H. H. Arnason. Thomas Hess of Art News also chose Solomon as one of the 10 outstanding painters of the year in 1961. Many prestigious museums purchased his work during this time.

Solomon became even more influential in the Hamptons and in Florida during the 1960s. During 1964 and 1965, Solomon created the Institute of Fine Art at the New College in Sarasota, Florida. He is credited with bringing many nationally known artists to Florida; Larry Rivers, Philip Guston, James Brooks, and Conrad Marca-Relli were among the artists who taught at the Institute. Later Jimmy Ernst, John Chamberlain, James Rosenquist, and Robert Rauschenberg settled near Solomon in Florida.

In East Hampton, the Solomon home was the epicenter of a group of artists and writers who spent time in the Hamptons, including Alfred Leslie, Jim Dine, Ibram Lassaw, Saul Bellow, Barney Rossett, Arthur Kopit and Harold Rosenberg. In 1966, Solomon hosted the first Artist vs. Writers Baseball Game in his backyard, a game in which the above artists and writers played. A number of artist-produced performances were also held at the Solomon home in the late 1960s, including the Frank O’Hara play Try Try with Larry Rivers and Shirley King, directed by Gaby Rodgers.

In 1970, Solomon, along with architect Gene Leedy, one of the founders of the Sarasota School of Architecture, built an award-winning precast concrete and glass house and studio on the Gulf near Midnight Pass in Sarasota. Because of its siting, it functioned much like Monet’s home in Giverny, France. Open to the sky, sea, and shore with inside and outside studios, these active environmental forces greatly influenced his work. His friend, the art critic Harold Rosenberg, said Solomon’s best work was produced in the period he lived on the beach.

During 1973 and 1974 a retrospective exhibition of Solomon’s work was held at The Cultural Center in New York and the Ringling Museum in Sarasota. Writer Kurt Vonnegut Jr. conducted an interview with Solomon for the exhibition catalogue.

Solomon was close to many writers, including Harold Rosenberg, Joy Williams, John D. McDonald, Budd Schulberg, Elia Kazan, Betty Friedan and Evan Hunter. He also had friends in the music world, including Mitch Miller, Eric Von Schmidt, Jerry Leiber, and Jerry Wexler. In 1990, the Ringling Museum of Art honored the artist with a solo exhibition, “A Dialogue with Nature.”  The artist died in Sarasota in 2004.