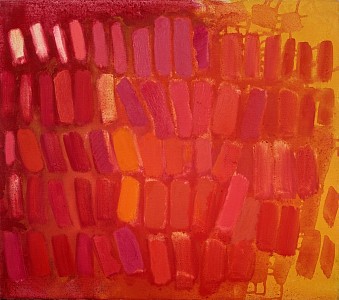 In the early 1960s, Yvonne Thomas (1913-2009) was one of many painters seeking a more rational, methodical alternative to the untethered, intuitive and often outsize gestures of Abstract Expressionism. The French-born Ms. Thomas — who came to the United States as a child and was a regular on the New York art scene after 1950 — made a series of modest but radiant proto-Minimalist works that, as seen in this moving show, “Windows and Variations: Paintings From 1963-65,” may be the best of her career.

Until around 1960, Ms. Thomas’s loose patches of color had been relatively generic, a de Kooning-infused form of Abstract Expressionism, albeit sensitive in its paint-handling and palette. But gradually she simplified: reducing the numbers of colors and limiting her shapes to a repeating pattern of lozenges or, often, fat, short brush strokes that suggest a form of counting.

Leaning this way and that, these elements floated in horizontal rows before fields of related hues. In “Transition” (1963), for example, yellow ocher, green and black repeatedly change places, defining shiny strokes and then matte background areas, almost in a kind of dance. In “Variations,” also from 1963, shades of red prevail fore and aft, but additions of white and black create shifting lights, shadows and shimmers. The repetition of identical elements would be foundational to Minimalism, but Ms. Thomas was less strict and more expressive. She kept her hand in, adding a fresh directness of touch, and the results give her a place in the still-emerging saga of postwar American abstraction.