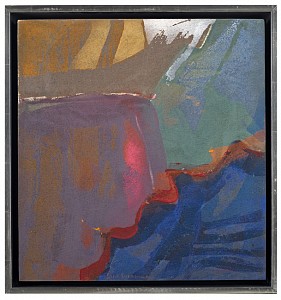 Our country, particularly New York City, became the center of the Western art world after World War II with the advent of abstract expressionism. No American artist looms larger in that movement than Jackson Pollock, and there is no more important Pollock work than his 1943 “Mural.”

Complementing the landmark display of this modern masterpiece at the Columbia Museum of Art is a temporary exhibition of works collected over six decades by South Carolina residents Dwight and Sue Emanuelson. Entitled “A Life in Art,” the exhibition features nearly seventy pieces, from major abstract expressionist paintings to iconic objects of midcentury design.

What is the genesis of this collection? Dwight Emanuelson began collecting art when he was just in his twenties, living in New York City and working as an investment advisor. He had a personal relationship with many of the artists whose work he purchased: “I’d help them manage their money, and they’d show me their art.”

Among the artists with whom he established friendships was abstract painter Syd Solomon, whose primary residence was Florida but who spent every autumn in East Hampton, Long Island beginning in 1959. Through Solomon and his wife Annie, Emanuelson met James Brooks and his wife Charlotte Park, who are now counted among the earliest abstract expressionists in this country. Both were friends of Pollock and his partner Lee Krasner; in fact, Brooks moved into the Pollock-Krasner apartment in Greenwich Village after the latter couple relocated to East Hampton. Furthermore, it was not long before Brooks and Park, whose work, particularly her mastery of color, is now getting a long-neglected critical appraisal, joined the general artistic migration to Long Island.

Quite a few of the artists represented in the Emanuelson collection rubbed shoulders with Jackson Pollock. Take, for example, Philippine-born Alfonso Ossorio, who was not only one of Pollock’s most important patrons but also an artist strongly influenced by Pollock’s attachment to the unpremeditated, unconscious gesture on the canvas. The current show includes Ossorio’s “Red Couple” with its expressive calligraphic brushwork.

The 1960’s marked the beginning of Dwight Emanuelson’s collecting habit; and that decade brought an evolution in abstract art, what some historians refer to as hard-edge painting, whereby the loose strokes and overlapping areas of paint characteristic of the first generation of abstract expressionists gave way to sharp, clear contours.

A quintessential example of this hard-edged approach is an abstracted landscape by David Budd, who was active in New York in the 1950s and who is represented in the current show with two works, most notably an abstracted landscape entitled “Morocco.” In this acrylic-on-canvas piece, a field of black presses down upon a field of blue – both areas divided by a sensuously curved line of white replicating the sweep of sandy desert punctuated by a single geometric figure – perhaps a stand-in for the country’s indigenous mud brick architecture.

Similar in approach is California artist Richard Diebenkorn’s 1970 color lithograph “Untitled: (Ocean Park),” with its juxtaposed, flattened shapes in solid colors, such as sandy yellow and ocean blue. The image reads like the product of aerial photography.

In the short video on display in the first of four museum galleries devoted to this exhibition, Dwight Emanuelson admits, “Art appeals to the person and perhaps not to the world sometimes.” The current show certainly reflects the Emanuelsons’ attraction to the overall modernist aesthetic, encompassing not only two-dimensional artworks meant to hang on the wall but also furniture pieces and decorative items.

Once gracing their Hilton Head home, where the couple has lived since 1972, but now on display at the museum are two chairs by the married designers Charles and Ray Eames: the now-classic molded plywood DCW dining chair and the bent and welded steel DKR chair with its leather-covered seat pad and “Eiffel Tower” legs. Equally arresting is Pierre Cardin’s 1970 “Lumico Table Lamp,” featuring a circle of white glass nestled within a gentle spiral of brushed steel. With their home doubling as exhibition space for their collection, it is easy to imagine art in every nook and cranny of the Emanuelson residence.

All of the pieces in the “Life in Art” exhibition have been gifted to the Columbia Museum of Art by the Emanuelsons over the last 35 years. Thus, their lives in art have now become, for a time, ours.