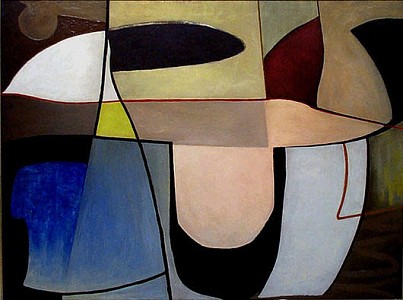 The American Abstract Artist movement was founded in 1936 in New York City, at a time when abstract art was met with strong critical resistance. Women played an integral part in forming the AAA, and Murray State's Clara M. Eagle gallery is housing an exhibit that honors these groundbreaking female artists. Emily Berger, an abstract artist featured in the exhibit, and T. Michael Martin, director of university galleries, visit Sounds Good to discuss the traveling exhibit.

The Murray State University Galleries and the department of art and design present Blurring Boundaries: Continuity to Change - The Women of AAA 1936-2018through the beginning of November. In the first exhibition dedicated exlusively to the intergenerational group of women artists of American Abstract Artists, Blurring Boundaries traces the history of AAA's female founding members through present-day artists. The exhibition highlights approximately 45 works, emphasizing each artist's approach to central tenents of abstraction - composition, color, content, and material. Well-known founders and early members of AAA, such as Perle Fine, Esphyr Slobodkina, Gertrude Greene, Alice Trumbull Mason (featured above), and I. Rice Pereira, are included in the exhibit. Their classic works will be displayed beside contemporary abstract artists such as Sharon Brant, Merrill Wagner, Cecily Kahn, Alice Adams, and Emily Berger.

Berger explains that not only did women have a pivotal role in the formation and success of AAA, they also had to contend with things that their male counterparts did not, such as "discrimination, gender bias, raising children, and just generally less freedom." Gender objectivity was highly unusual at the time of AAA's creation, and the AAA's ability to create an almost even split of male and female members remains remarkable even within the contemporary art world. Women within AAA had a remarkably active history and generative relationship from the group's founding, without being dismissed outright on the basis of gender. Pure abstraction gave women a freedom they did not have when painting representationally. Abstraction did not suggest the same repressive signifiers, epecially in an era when art critics were still suprised by women's ability to create strong artwork.

To an untrained eye, abstract art might be difficult to comprehend. Martin and Berger explain the basis of abstract art, which can include simplified imagery and imagery not recognizable from the 'real' world. Although it seems modern, abstract art can be found within ancient Greek, Egyptian, African, and Asian culture. However, unlike widely known artists such as Picasso, who abstracted images of the 'real' world, the female artists of Blurring Boundaries created their abstractions from scratch. "The work that you see in the show tends to be non-objective in the sense that the artists are not starting from the real world and abstracting it," Berger explains. "They're starting from the materials, the colors, the forms, the lines, and letting those elements speak for themselves."

Blurred Boundaries will be on display at the Clara M. Eagle Main Gallery, located on the 6th floor of the Price Doyle Fine Arts Building on Murray State's main campus, now through November 1st. Gallery hours are Monday through Friday, 8 a.m. to 4:30 p.m., with extended hours on Tuesdays and Thursdays until 8 p.m. Admission is free and open to the public. For more information, visit the Murray State website or the Clara M. Eagle Gallery's Facebook page.