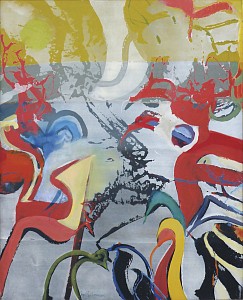 The post Columbus Day fall slump — when many already have maxed out on pumpkin and apple picking, the corn maze is old hat, and hay rides elicit a yawn — has met its match. A number of new fall exhibitions are popping up everywhere, including at Guild Hall, which will open three new shows on Saturday.

“Please Send To: Ray Johnson” is predominently a collection of “Mail Art” Johnson sent to Ted Carey, left to the museum by Tito Spiga as part of his bequest. “Syd Solomon: Concealed and Revealed” operates as a retrospective of the artist, who died in 2004, using his archive to provide new context to his output from his early days before and after World War II, when he devised camouflage techniques for the military, to late work from the early 1990s. Finally, “Sara Mejia Kriendler: In Back of Beyond” will showcase the artist’s Colombian roots with sculptures in terra-cotta, plaster, and gold leaf that also reference today’s consumer culture. Ms. Kriendler was the recipient of top honors in the 2016 members show.

Always an “artist’s artist,” Johnson shunned traditional exhibition outlets and often set himself in opposition to his contemporaries in the art world. When they were mounting “Happenings” with elaborate visuals and important themes, Johnson mounted “Nothings,” where guests would gather and hours later he might drop something on the floor and then leave. He is — generally and locally — best known for his fatal last act, when he dived the Sag Harbor-North Haven bridge on a January day and swam the backstroke into the harbor.

Much has been made of the immaculate way he left his archive in his small house in Locust Valley and the role of the number 13 as factors in the room he chose at Baron’s Cove Inn, his age, and the date Jan. 13, 1995, on which he jumped off the bridge. While some have questioned his true intent, i.e., did he really intend to end his life, the evidence strongly suggests it. Still, the artist often spoke in riddles and shrouded the meaning of his work in mystery. Perhaps the ambiguity here was purposeful too.

But before the artist completed this last act, he was making collages and Mail Art, a genre he introduced in the 1950s. These pieces included notes and cutouts from magazines and other sources, sometimes altered with drawing, stamps, or collage and sometimes not. He sent them to fellow artists and other tastemakers and society figures often with detailed instructions on what to do with them next.

In this way, he not only subverted traditional institutional settings such as galleries and museums, but also addressed the changing role of the post office. Jess Frost, the curator of the exhibition, noted that Johnson faced the post office in Sag Harbor when he jumped off the bridge.

Since Johnson’s original work has been altered by those who received it and sent the mailed contents on to their next recipient, it is not always clear where his hand in the art ends and the other contributions begin. Therefore, the contents of the Guild Hall archive can be presented in vitrines so that each group can be seen together but in the informal way in which it was meant to be appreciated.

Solomon’s painting, informed by the camouflage techniques he learned while earning five bronze stars for his service on the Western Front during the war, also was influenced from his training in technical arts in high school and his professional work in advertising design. In his later work, traces of calligraphy and handwriting can be discerned in his gestural brushwork. The exhibition, which provides new insight into his working methods and source material, is presented in partnership with the Solomon Estate and will have a 96-page exhibition catalog with essays by Michael Auping, George S. Boige, Gail Levin, and Michael Solomon, the artist’s son.

The shows will stay on view through Dec. 16. Each show will have special programs associated with it, including a gallery talk on Sunday with Mr. Solomon at 1 p.m. Further talks and related events can be found on the Guild Hall website.