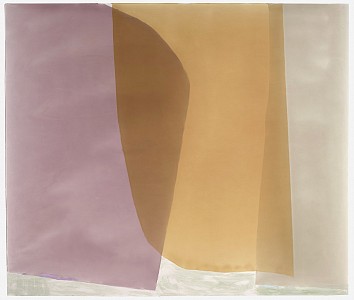 Empirical Empyrean (2017), the title of one of Jill Nathanson's fifteen abstract paintings in "Cadence" at Berry Campbell, says it all. Each painting is built out of discrete, translucent color areas that thicken where they overlap. As they coalesce into fields, juxtapositions of hue prompt the eye to unify the compositions. The color transcends local incident, while the translucency generates an overall glow.

Nathanson paints by lifting and tilting large wood panels to spread regions of poured, thick polymer that she has masked off with tape. Each layer dries slowly, over a day. She sometimes adds small passages in oil, her sole brushstrokes, to anchor and bind the fluid forms.

The shapes, hybrids of straight and ragged edges and quasi-organic forms, elude classification. Their stark radiance is epitomized by Neighboring (2017), in which three vertical forms hovering together are brought into necessary tension by a mere sliver of lavender on the top edge.