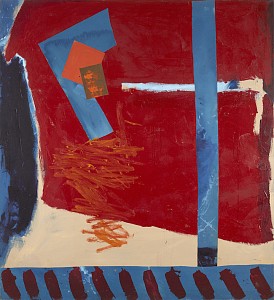 The paintings of Ann Purcell are a tour de force of abstract mechanics. At Chelsea’s Berry Campbell gallery, an impressive selection from her “Caravan Series” of the late 1970s and early 1980s is now on view.

Born in Washington, D.C. in 1941, Purcell studied with the Washington Color School painter Gene Davis, who became a mentor. Color and movement have likewise been hallmarks of her own work. The force of Purcell’s compositions is not so much based on a tension of in and out, surface and depth, but of up and down. Her paintings owe much to a sense for the choreography of shapes and the effects of gravity on forms. In particular, she uses collage, with strips and squares of canvas adhered to free-form acrylic designs, to explore the implications of movement. These forms seem to hang and swing, twist and turn, as though pinned at odd angles. The blue rectangle of Gypsy Wind (1983) tips like a lever. A jumble of shapes leap from the ground in Race Point (1982). These actions then appear to interact with the paint beneath, wiping and stirring her colors into dynamic compositions.