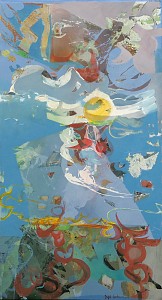 Syd Solomon (1917-2004), the gifted abstract-expressionist painter, was well recognized as an artist in the middle of the last century, especially in the early 1960s. He kept studios in East Hampton and Sarasota in Florida, spending time in both places during the course of the year. Solomon established an art presence in Sarasota, bringing in artists such as James Brooks and Larry Rivers to participate in the community there, as well as teaching at Sarasota’s Institute of Fine Art, the educational center he founded at New College. In the East Hamptons, he met Pollock, de Kooning, and Kline. His work, an attractive amalgam of bright colors and mostly organic shapes, feels as if it were heavily influenced by his experience of landscape. As a noted member of the abstract expressionists’ first generation, Solomon played a distinctive role as an artist who brought people together, at the same time developing a compelling style of his own. This style can’t be clearly tied to any particular colleague, but takes part in a playfully exuberant use of color only barely contained by the natural forms that they fill. Living as Solomon did in places of unusual beauty, it seems inevitable that his art would reflect his surroundings.

A late painting called Inland-Outland (1988) feels like a summary of Solomon’s long painting career. Created with acrylic—Solomon was one of the first artists to use this medium—and aerosol enamel on canvas, the painting is a self-confident display of colorful, organic forms. On the lower left, we see a series of mustard-yellow, partly completed ovals that echo outward from a circular opening way at the left. That opening is also outlined by a red band. On the right side of this two-paneled painting, a group of differently sized and shaped organic forms hold sway: a white lozenge with inchoate black, slate blue, and gray shapes. Next to it sits a green, lemon-shaped form with a lower white element. Deep in the corner, there are two curving stripes, partly purple, partly green. Above, in what is clearly a blue sky, random forms drift, hover, and float. Irregular in outline, they refer to little but themselves.  Their colors are various: green, blue, yellow, and black. On the far right, two wings, splattered with yellow and blue color in the manner of Pollock, are attached to a dark-green pineapple shape. Describing the composition doesn’t do justice to the intuitive savvy behind its compelling gestalt. Solomon may not have been a major voice in the history of abstract expressionism, but he was a truly gifted painter who effortlessly internalized the process and vision of the movement.

In fact, an artist like Solomon can reveal greater truths about his esthetic and milieu because he produced a body of work that does not show the impact of an unparalleled vision or dominating personality. The extraordinary triumvirate of Pollock, de Kooning, and Gorky possessed sensibilities that were so strong, they were able to impose their temperament on a style that was transparent in its acceptance of different kinds of form (the New York School is hardly a unified movement). Solomon reflects, in his highly talented paintings, a kind of style that belonged more to the general manner of painting at the time—rather than transcending its conventional tenets. In this way, he opens up a genuine understanding of the abstract-expressionist movement—we see the art and not the painter overwhelming the art. The vertical work called Summer Spell (1985), with its skeins and wisps of color—white, yellow, blur, some brown—create a barely baroque maelstrom of abstract effects. The complexity of the work is almost too intricate to describe; ribbons of paint travel in what looks like the upper atmosphere, and their rough patches and ropy loops rise and fall in minor crescendos up and down the expanse of the canvas. One has the sense that this is an improvisation about the charms of a season, rendered at a time when one could still paint with deliberate beauty.

Overbay (1980) continues the lyric abstraction Solomon is known for. Here there is less a sense of drama, and more a sense of balanced form. On the bottom are three fairly thick ribbons of paint rising upward on the right; the bands’ colors are blue with brown patches on the bottom, separated by a white from the middle band, which is dark brown with darker brown patches cutting into the ribbon. On top of that is a green strip that gently curves upward to the right. Like the other two bands, it too has brown blotches painted over it (some of the blotches cross the bands’ white-line boundaries). In the second half of the poem, there is an undulating blue area, its lower edge formed by the curves of the green stripe. Above it is a white area that is filed with a mélange of forms: a light brown stripe with white openings; a double-banded, red horizontal stripe; and two organic forms consisting of black and gray ovoids backed by gray and black, respectively.

How are we to see the career of an artist like Solomon, who so brilliantly made use of abstract-expressionist conventions? Certainly, he is far more accomplished than his current, relative anonymity deserves. Perhaps it is best to remark that, for reasons beyond anyone’s control, certain artists lose recognition once they are gone. In Solomon’s case, this is a shame because he offers an extraordinarily accomplished body of work that reveals genuine insights about the style he participated in. This show, then, is more than an attempt to bring a neglected painter to the surface; it is also offering proof that Solomon’s output should remain publicly evident in the years to come.