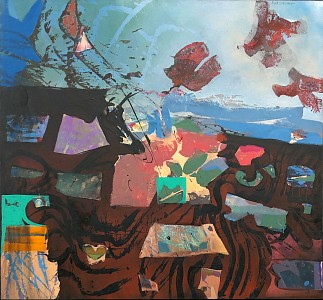 There is a natural tendency among art historians, critics, curators, and even in human nature to place people, places, and things in categories, eras, styles, periods. It helps make sense of how ideas and objects fit into a continuum, or where they fall along the timeline.

At the centenary of Syd Solomon’s birth, it is time to free the artist from these constraints and celebrate him for his unique contributions, which is what “Syd Solomon: Time and Tide,” a show at the Berry Campbell Gallery in New York City, does eloquently.

Born in 1917, Solomon was only a few years younger than most of the first generation of Abstract Expressionists. His service in World War II, however, took him away during the formative years of the movement, forcing him to play catch-up after he returned, when the New York School was still at its apex. After suffering a severe bout of frostbite during the Battle of the Bulge, he experienced extreme discomfort in cold temperatures throughout his life. The choice to relocate to Sarasota, Fla., removed him once again from his colleagues.

A thorough and illuminating essay by Gail Levin in “Syd Solomon: Concealed and Revealed,” the monograph published to mark the centenary, describes his unique artistic development and makes the case for his unequivocal inclusion within the Ab Ex artistic canon, which he clearly deserves. The art market, which rewards the expected, the recognizable, and the branded, appreciates this kind of labeling.

With his earlier German Expressionist-inspired work illustrated in Dr. Levin’s catalog essay as a guide, it is obvious that Solomon showed early promise. She notes that his war training and mastery in camouflage, which earned him several Bronze Stars, “was almost like an art school to him.” In addition, the aerial photos he took of Europe, a view from the air that inspired the generation of modernist painters prior to World War I, also ended up in his paintings. The gridded landscape below, looking so geometrically removed from reality, offered a new way of looking at the world, one we take for granted today.

From an academic perspective, Solomon seems far more interesting as an outlier. His camouflage techniques and adventurous experimentation with new materials, including acrylic and spray paint, produced art inspired by what came before and during his formative years, but he is better appreciated in his own right.

The exhibition solves this conundrum. Instead of a full retrospective, the show is more of a snapshot, with paintings from the 1970s and ’80s. This is an era removed from the confines of midcentury abstract painting strictures and comparisons with his predecessors. The work he painted during this period, while immersed in the environment in a house on the Gulf of Mexico, is considered some of his best. Yet his continued pursuit of action painting at this time places him back in the role of maverick. As that genre receded from the art world epicenter, he doubled down, as many did here, eschewing Minimalism and Pop’s hard edges and conceptual coolness in favor of the fervor of his youth.

Having burnished his reputation in the late 1950s and 1960s with consistent gallery shows and museum acquisitions, in this later period he seems, if not alone, more anonymous. Still, he was influential in the artistic communities of East Hampton and Sarasota and is credited with hosting the first East Hampton Artists and Writers Softball Game in his backyard in 1966.

In both places, he often worked outside, using a hose to rinse off the portions of his canvases that he masked with different pastes and materials after spraying colored inks over them. Michael Auping, a friend and a director of the Ringling Museum in Sarasota, notes in his catalog essay that Solomon’s frostbite also affected the feeling in his hands. As he relied more on his elbows and shoulders to apply paint, his gestures were bigger than most, “like ocean waves.”

There is so much that is sun-dappled and color-saturated about these paintings that the occasional inclusion of patches of brown or black seems intrusive, like a friend who always brings up the evils of trans fats or sugar just as you are about to indulge. Not to be too much of a psychoanalyst, but there does appear to be some melancholy creeping into these exuberant compositions. Kurt Vonnegut referred to his paintings as mediation: “He connects his hand and paintbrush to the deeper, quieter, more mysterious parts of his mind — and he paints pictures of what he sees and feels down there.”

The exhibition will remain on view until Nov. 11. It precedes a retrospective exhibition to be presented at Guild Hall and the John and Mable Ringling Museum beginning late next year.