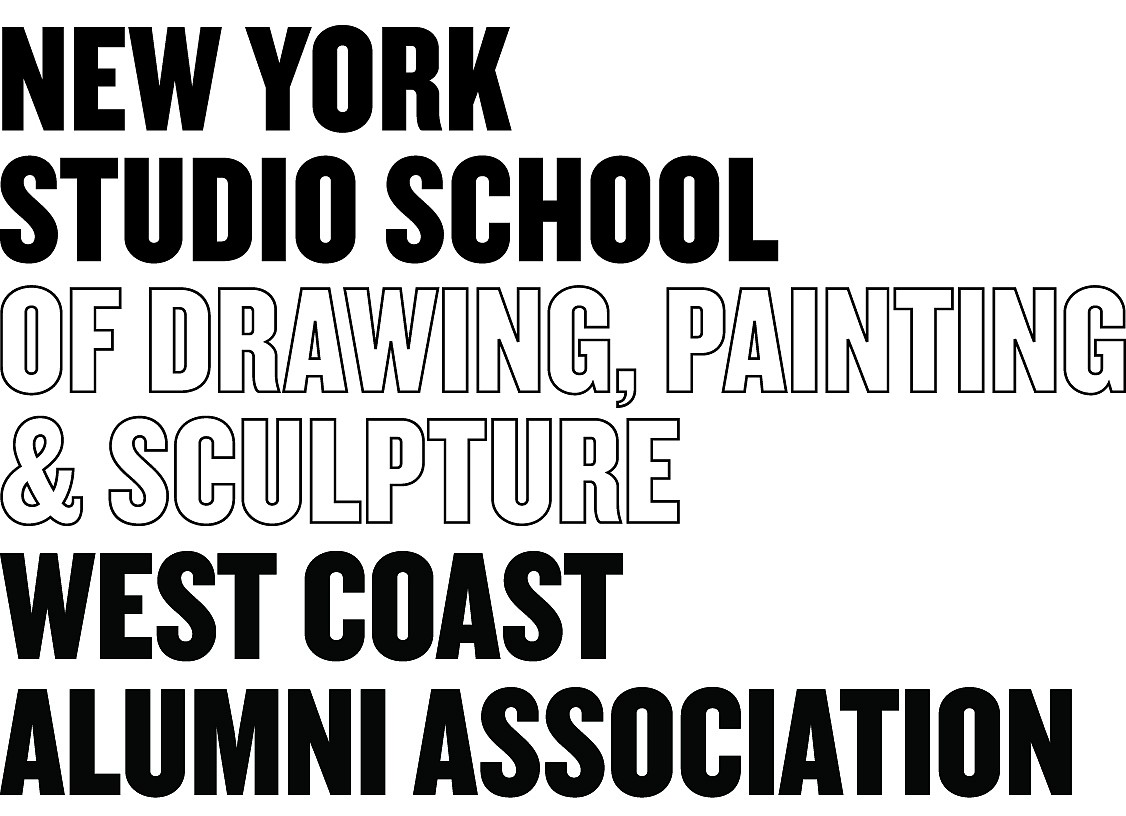 Curator, Karen Wilkin, writes about the show: “New York Studio School students come from all over the world and settle in many different places after they complete their studies in the school’s historic 8th Street building. Last year, an exhibition organized by the West Coast chapter of the NYSS, held in San Francisco, showcased the varied approaches of alumni resident in California, Oregon, Washington, and Hawaii. This year, thanks to the generosity of Berry Campbell, New York, and Paul Thiebaud Gallery, San Francisco, “Coast to Coast,” an expanded version of this idea celebrates the achievements of NYSS alumni living on the West Coast or from there, but living elsewhere. Their work embraces an impressive range of conceptions, materials, and possibilities. What unites all of the exhibited artists is their attention to the physical expressiveness of their work, no matter what their chosen medium, and their sensitivity to space, whether invented or responsive to perception. And they are all ambitious, in the best sense of the word, striving to make the best work they are capable of. The NYSS is grateful to Berry Campbell and Paul Thiebaud Gallery for making this exhibition possible.”

Berry Campbell summer hours are Monday through Friday, 10 am to 6 pm. The exhibition is accompanied by a catalogue with an essay by Karen Wilkin. For information, please contact Christine Berry or Martha Campbell at 212.924.2178 or info@berrycampbell.com

Christine Berry and Martha Campbell have many parallels in their backgrounds and interests. Both studied art history in college, began their careers in the museum world, and later worked together at Spanierman Gallery in midtown Manhattan. Most importantly, however, Berry and Campbell share a curatorial vision.

Both art dealers developed a strong emphasis on research and networking with artists and scholars during their art world years. They decided to work together, opening Berry Campbell in 2013 in the heart of New York's Chelsea art district, at 530 West 24th Street on the ground floor. In 2015, the gallery expanded, doubling its size with an additional 2,000 square feet of exhibition space.

Highlighting a selection of postwar and contemporary artists, the gallery fulfills an important gap in the art world, revealing a depth within American modernism that is just beginning to be understood, encompassing the many artists who were left behind due to race, gender, or geography-beyond such legendary figures as Pollock and de Kooning. Since its inception, the gallery has been especially instrumental in giving women artists long overdue consideration, an effort that museums have only just begun to take up, such as in the 2016 traveling exhibition, Women of Abstract Expressionism curated by University of Denver professor Gwen F. Chanzit. This show featured work by Perle Fine and Judith Godwin, both represented by Berry Campbell, along with that of Helen Frankenthaler, Lee Krasner, and Joan Mitchell.

In addition to Perle Fine and Judith Godwin, artists whose work is represented by the gallery include Edward Avedisian, Walter Darby Bannard, Stanley Boxer, Dan Christensen, Eric Dever, John Goodyear, Balcomb Greene, Gertrude Greene, Ken Greenleaf, Raymond Hendler, Jill Nathanson, John Opper, Stephen Pace, Charlotte Park, William Perehudoff, Ann Purcell, Mike Solomon, Syd Solomon, Albert Stadler, Yvonne Thomas, Susan Vecsey, James Walsh, Joyce Weinstein, Frank Wimberley, Larry Zox, and Edward Zutrau. The gallery has helped promote many of these artists' careers in museum shows including that of Bannard at the Institute of Contemporary Art, Miami (2018-19); Syd Solomon, in a traveling show from 2017 to 2019 that will conclude at the John and Mable Ringling Museum in Sarasota, Florida; Pace at The McCutchan Art Center/Pace Galleries at the University of Southern Indiana (2018) and at the Provincetown Art Association and Museum (2019); and Vecsey and Mike Solomon at the Greenville County Museum of Art, South Carolina (2017 and 2019, respectively).

Collaboration has been an important aspect of the gallery. With the widened inquiries and understandings that have resulted from their ongoing discussions about the art world canon, the dealers feel a continual sense of excitement in the discoveries of artists and research still to be made. Berry Campbell is located in the heart of the Chelsea Arts District at 530 West 24th Street, Ground Floor, New York, NY 10011. www.berrycampbell.com.